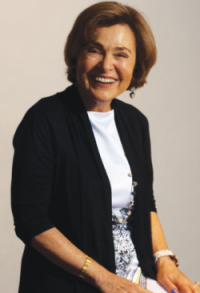 Patricia Hill has been a psychotherapist in private practice for more than 30 years. She began her career as Assistant Director at the Health Insurance Association of America working with their lobby division and handling health agencies that were being established at that time. She soon became Director of the HIAA program.

Her community service includes serving on the board of Medicalert for several years. Later, she joined a committee in charge of fundraising at the Health Care Chaplaincy and served there for several years. She then joined the board of the City College Fund, where she was the treasurer of the board and served for 15 years. During her time as a board member of the City College Fund, she supported numerous students with scholarships, established a mentoring activity called The Culture Project, and sponsored an international exchange program for theatre majors at CCNY to attend a ten-weeks long intensive seminar at the London Academy of Music and Dramatic Arts.

Ms. Hill was born and raised in New York and her education reflects that. She received her BA from Hunter College and her MS in Educational Psychology from CCNY. She got both of her degrees at night while working full time.