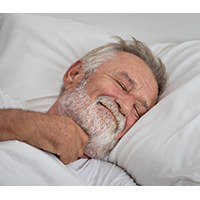 While intraocular pressure (IOP) can rise during nighttime, this does not appear to be the primary link between sleep apnea and glaucoma as glaucoma progression occurs in some patients despite very low IOP.

“There appears to be a strong connection between the two. Patients with sleep apnea should be tested for glaucoma and patients with normal tension glaucoma should have polysomnography to rule out sleep apnea,” Dr. Ritch advises.

Another sleep-related topic is the question of whether sleep position is related to glaucoma progression. Some studies indicate that sleeping on the same side of the body as the eye with the greater visual field loss could be a factor that contributes to glaucoma progression. Some doctors suggest that glaucoma patients or high-risk patients try to train themselves to sleep on their back. It has also been suggested that to avoid nocturnal eye damage, normal-tension patients raise the head of the bed by 20 percent using a sleeping wedge.